I never felt the need to do much decorating for the Holidays while living in South Africa.  Sure, we had a Christmas tree and some Christmas decorations up, but never on the scale that I experience here in America.

Halloween sounded like a fun holiday to decorate for, especially with young kids in the house.  I finally got the chance to try my hand at Halloween decorating when we bought our first house.  The challenge for me was spending as little money as possible while making most of the decorations myself.

My first trip was to the Dollar Store where I picked up some thick black paper.  I found some cute clipart online, and was going to enlarge the images on my black paper, and cut out some shapes.  I settled on cats and bats.  I also wanted to do a silhouette of a man in one of the windows.

I printed the outlines on letter-size paper and traced them onto the black paper.  I then used scissors to cut out the shapes.  The final shapes were taped on the inside of all our front windows and looked really great when it got dark outside and our lights were on. 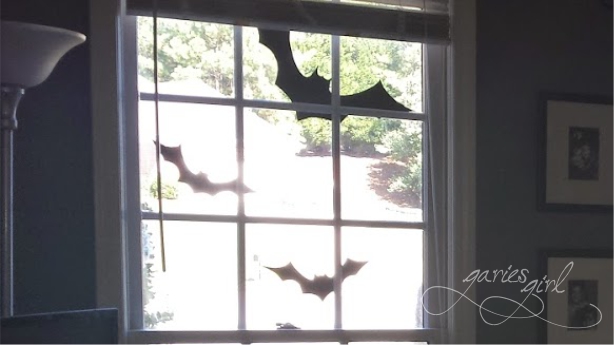 I got some cobwebs and caution tape from Walmart.  We did the regular cobwebs on all our bushes and small trees and then added some caution tape around our front walkway.  I came up with the idea to have half a body sticking out of one of the bushes.  The kids and I had a lot of fun stuffing an old pair of jeans with plastic bags, while Pieter fitted two pieces of wood together for the legs and to also serve as a support for our “corpse”.  We added an old pair of shoes and inserted our legs upside down into one of the bushes.

Did you see the shape in the window?  Simon’s Halloween costume from the previous year was just too good to not use again.  It was a black cape with a plastic neckpiece and no head.  I used a rake as support and propped it up in my office window.  My office is at the front of the house, and very visible when you are at the front door.

Since we now had some decorations up, it sounded like a good idea to host a Halloween party.  I decided to only decorate the powder room for this party.  I added some leftover cobwebs, fake plastic spiders and flies.  The toilet tank got a piece of black paper, with two yellow “eyes”.  I printed some pictures of the kids in previous Halloween costumes and added them to an unused picture frame.  I also found some other scary pictures and added them to another empty picture frame.  The bathroom door also got a new sign: “Disembowelment Room”. 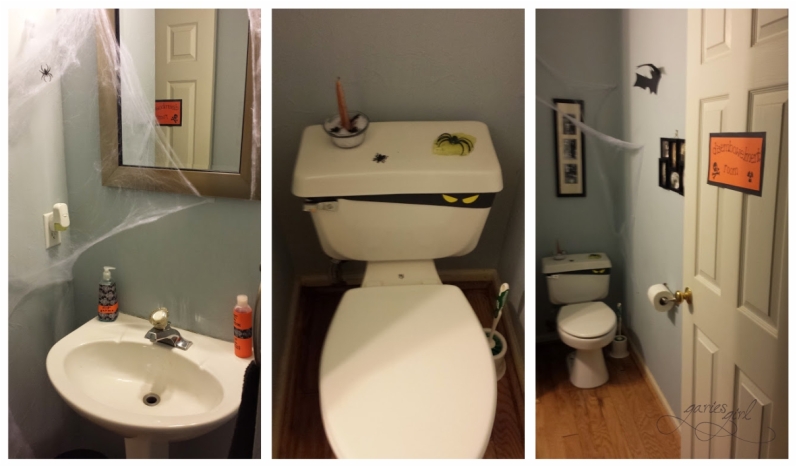 I had some leftover orange and black paper and prepped name tags for the snacks we prepared.  Everybody also brought a snack to share and all I had to do was come up with a funny name and write it on my premade signs.  We had Mummy Sausages, Monster Mac & Cheese, Batwings, Eyeballs and Cheese Ghosts, to name just a few.

Since I completely forgot to get a Halloween costume for myself, I had to improvise at the last minute.  I took a black t-shirt and cut “rib” shapes into it.  I wore the black shirt over a white shirt, and voila!  Instant skeleton costume!  A good match for my little Chihuahua Batman.

I reused some of the decorations from this Halloween a couple of years later.  See how I changed it up to a very Subtle Halloween or read about how you can make some Cheap Window Decorations for Halloween.

How do you decorate for Halloween, without going over budget?