After returning from our successful “scouting” trip, we gave ourselves 6 months to get back to the United States.  A June 2011 arrival date would give the kids time to adjust before enrolling in the US school system in August.  It would be summer vacation and their cousins would be free to spend time with them (and help them brush up on their English skills!!).  They would be going from an Afrikaans speaking school right into an American public school.

The first item on the list was telling our family and friends about our new plans.

I’m sure some were expecting the news on some level, but quite understandably, not everyone liked the idea.  I’m the first member of my family to undertake such an ambitious move, and Pieter was the second of his.  We had to sell our house, cars, motorcycle, and either move or get rid of (only) 8 years’ worth of furniture and random stuff.

We worked at the family business, a signage company that my dad bought in the 90’s, and were close friends with a lot of our employees.  They felt more like family, so breaking this news to them was just as tough.  Lots of uncertainty surrounded the business and we questioned how it would operate without us (not that it couldn’t, of course), but I felt like we were an integral part of it…

Quite early on, I started a list of the furniture and items that I wanted to keep and move with me to our new home in Atlanta.  Due to the cost of shipping things halfway across the world, we decided to limit ourselves to half a shipping container.  This meant our belongings would get packed up, and as soon as the other half is filled with someone else’s items, it would all get loaded onto a ship and make its way to New York.  Sounded simple and painless enough (and it was, thank goodness).

Second on the list was getting our house ready and listed for sale.

My brother Gary, and his wife Willet, have been frequent visitors to our house, and always spoke about how they really loved our house and all the changes we’ve made to it over the years.  They immediately started talking about buying it and renting out their own house.  This turned out to be a big plus for us.  We were able to offer them a better sale price, and we didn’t have to go through the listing process.  In all honesty, I don’t even remember the actual sale process…  I do know, it’s not nearly as complicated as it is here in the US (we’ve gone through buying and selling properties a few times now, but that is another story).

We quickly had a collection of furniture and items that we were going to move with us shoved into one room of the house, and the rest went on the “To Sell” list.  I listed them by room, included pictures and started circulating them at work, and then on to friends, and friends of friends.  Soon, we were starting to let stuff go. 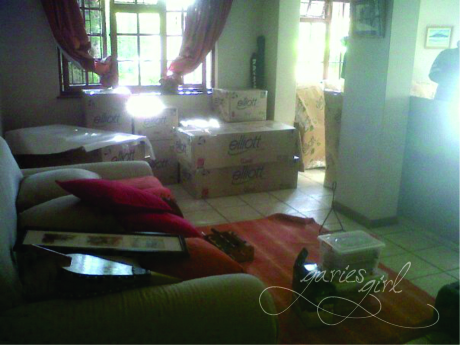 This part of the process went much smoother than I expected, mostly because we were entering the “can’t wait to get going” phase.  Our moving company showed up and spent a day inspecting, labeling and packing our items.  This happened about two weeks before we were set to leave.  My brother was keeping some of our furniture and before long, they started moving in.  Moving in, you ask?  Yes, we were still staying in our house, after they officially bought it.  Hey, we did move over to the guest room and they moved into the master…  Those were certainly a couple of interesting weeks!

We had one “Going Away” party after another, and in true South African style, it all included a lot of eating and drinking.  People were still stopping by the house to see us, and most nights ended in an impromptu braai (for those of you unfamiliar with the term, it is the South African version of a BBQ or grilling out) or at the very least, a couple of drinks.

And just like that, it was time to leave for the airport and start our new adventure!

Read all about our first month in the USA at We Arrived – Part 1.